In order to apprise the new parents about the DPS academic system, an orientation program was held in the school library on 2nd April 2019. The Principal and the Coordinator addressed the gathering and briefed about the curricular and co-curricular activities to be held in the current academic session. Various security procedures being followed by the school to ensure the safety of children in the school premises were also discussed. Parents were also apprised about the school mobile app and GPS tracking system. 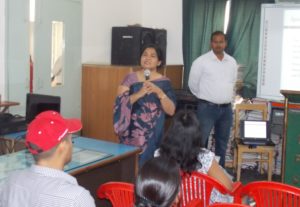 Be the beacon of light in someone’s darkness.

In helping others, we help ourselves and improve the society as a whole. The country stood united for the victims of catastrophic floods in Kerala. Students of DPS Rewari also contributed their little to extend a helping hand to the Kerala flood victims. A Bal Mela was organized by different classes on 5th September 2018 in the school premises. Children put up various food and game stalls to raise fund for Kerala Chief Minister Relief Fund. A group of children along with teachers handed over the collected amount to Deputy Commissioner of the city. A small amount was also contributed for Navprerna, an NGO working for the welfare of autistic children.

Cleanliness is not next to godliness, it is godliness.

Being a part of the Cleanliness Drive initiated by Government of India, children of DPS Rewari participated in a number of activities. Children cleaned their classrooms, desks, grounds etc. with great enthusiasm. A rally on ‘Swachhta’ was also carried out by the students of Class X in order to spread awareness about cleanliness. Children also presented beautiful Nukkad Nataks in order to convey the message of cleanliness in a strong way.